A battle over neighborhoods near transit hubs looms, and the result may change theway your city looks

By Katy Murphy and Erin Baldassari

SACRAMENTO » Taking aim at climate change, highway gridlock and soaring housing costs, a California lawmaker has ignited a red-hot debate with a proposal that would force cities to allow more apartments and condominiums to be built a short walk from train stations and bus stops.

Arguably the most radical in a series of legislative fixes for California’s crippling housing crisis, Senate Bill 827 has the potential to reshape neighborhoods up and down the state, from Berkeley to Los Angeles, by overriding single-family zoning and superceding limits on new housing near public transportation.

“This bill goes right to the heart of what has prevented more building near transit in California,” said Ethan Elkind, who directs the climate program at Berkeley Law School’s Center for Law, Energy & the Environment. “It would be really transformative. Over the coming decade or so, we could have millions of new homes with access to transit.”

SB 827 is the latest attempt by Sen. Scott Wiener, a San Francisco Democrat, to attack a severe housing shortage widely blamed for runaway rents, astronomical home prices, and the rise of climate-warming “supercommutes” from

Already, the bill has electrified supporters, including the pro-development YIMBY (Yes In My Backyard) coalition sponsoring it, who believe California’s attachment to single- family neighborhoods is strangling the state. And it has inflamed opponents, panicked by the prospect of stripping local government of some of its long-held authority and failure to ensure adequate affordable housing. Beverly Hills City Councilman John Mirisch described it on Twitter as “Soviet-style master planning with raging crony capitalism.”

The measure would allow housing developments of four to eight stories within a half-mile radius of every BART station, Caltrain stop or other rail hub and a quarter-mile from bus stops with frequent service. The limit would be higher for main streets and developments near bus stops or immediately surrounding the rail stations.

A map from the Metropolitan Transportation Commission with nearly identical parameters as the bill shows large swaths of Oakland, Berkeley, San Francisco and San Jose shaded where the legislation would apply.

In San Francisco alone, the Planning Department estimates height limits would increase in 96 percent of the city if the bill is ultimately approved.

Near the Ashby BART station in Berkeley on a recent weekday, several people said they feared the “Manhattan-ization” of the Bay Area, with singlefamily Victorian homes replaced by towering apartment complexes. Others wondered who would be able to afford living in these new apartments, which will likely be sold or rented at a premium because of their proximity to transit.

Denise Pinkston, a developer who supports the bill, said in an interview that she expects some owners in affected areas would divide their sprawling homes into smaller apartments or add two granny units to the backyard or sell their house to a developer seeking to build a triplex or four-story walk-up on the lot.

“This is not Shanghai on the BART system,” she said, referring to the lofty skyline of the world’s largest city. “What you’re going to get is infill that’s going to feel more like Boston.”

That’s just what Wiener envisions. California has the capacity to add 1to 3 million homes within a half-mile of transit hubs, according to a 2016 McKinsey Global Institute report. But that won’t happen, he argues, as long as local elected officials stand in the way.

“Traditionally in California, we have viewed housing as purely a local issue with little or no role for the state,” he said in a recent interview. “That approach doesn’t work anymore. That approach of allowing this race to the bottom among local communities has helped to drive the car into a ditch, and we have to recalibrate.”

The proposal would not fundamentally change how cities evaluate and approve such projects. They could still reject a development if they deemed it would destroy a historical landmark or violate local demolition rules. But officials could no longer subject a proposed housing development to local height or density limits that are lower than those in the bill or require developers to build off-street parking.

Weinermade his first revisions to SB 827 this week, adding anti-demolition provisions and other protections for tenants whose buildings could be redeveloped under the bill. But strong political headwinds will almost certainly require more compromises.

The idea quickly won the support of prominent tech leaders as well as trade associations representing landlords and developers. But the League of California Cities is opposed, and Wiener has yet to win over labor, a dominant force in Democratic state politics. Cesar Diaz, a lobbyist for the powerful California Building and Trades Council, called the bill “incomplete” and lacking provisions such as those that require contractors to pay the prevailing wage, changes that could weaken the proposal’s impact.

Some housing advocates have yet to take a stance on the bill, disappointed it does not include affordable- housing requirements beyond what cities currently require. Since SB 827 increases the value of land by allowing taller developments to be built, it should in return require developers to create some below-market-rate units, said Jeff Levin, policy director for the nonprofit East Bay Housing Organizations.

“We’re not in favor of just giving away value to private developers,” Levin said. “There needs to be some trade-off.”

And because the bill applies only to stops with high-frequency bus service, there’s a question about what happens if service is reduced on a particular route. The Sierra Club California argues Wiener’s proposal could actually hurt the environment by galvanizing opposition to public transit improvements. It came out against the legislation, which Wiener called a “bizarre, antienvironmental move.” But some big-city mayors are open to Wiener’s idea. San Jose Mayor Sam Liccardo is hopeful it will compel environmentally friendly growth in suburbs, which he didn’t name, that he says have benefited from billions of dollars in public transit investments without approving the housing to make those services sustainable.

“That is a colossal waste of public investment,” he said.

A spokesman for Los Angeles Mayor Eric Garcetti said the bill was “still too blunt for our single-family home areas” but called the amendments encouraging. And in an interview last month, Oakland Mayor Libby Schaaf said she would likely get behind the proposal if it addressed her concerns about displacing current tenants, a worry shared by Berkeley’s mayor, Jesse Arreguin.

Arreguin initially called the bill “a declaration of war against our neighborhoods” but has tempered that and taken a neutral position, calling the amendments a positive step. He said he will advocate for the legislation to do even more to protect tenants.

“This bill is moving forward very quickly,” he said. “I’m trying to be more constructive in where I focus my energy.”

For some residents, already amazed at the number of cranes dotting skylines from San Jose to San Francisco and from Oakland to Berkeley, the bill is a signal the rapid pace of change in the Bay Area shows no sign of slowing. Shirley Mitts has for more than 70 years owned two Victorian homes that have since been converted into storefronts and apartments adjacent to the Ashby BART station.

A state Senate bill would require cities to allowmore housing near transit stops. Here, housing construction is underway opposite the MacArthur BART station in Oakland on Feb. 6. 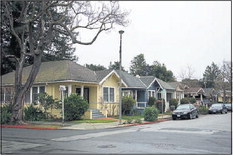 The pro-development YIMBY (Yes In My Backyard) coalition believes California’s attachment to single-family neighborhoods is strangling the state.

Click here to see this page in the eEdition: